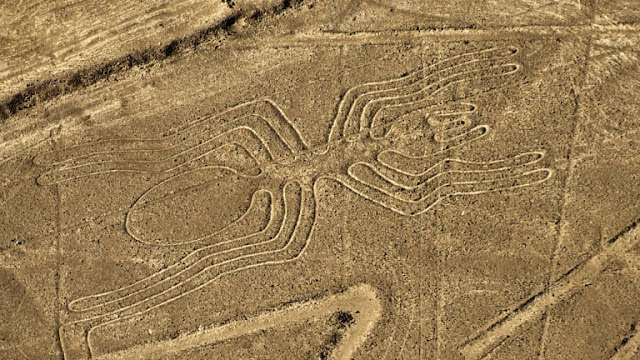 Situated in the south of Peru, within the vast Nazca Desert, the Nazca Lines comprise hundreds of millenary geoglyphs attributed to the Nazca civilisation, which is believed to have inhabited the territory around the time their formation was estimated, namely between 400 and 650 AD. Similarly to many ancient inscriptions or constructions, geoglyphs have always been an object of fascination for the modern world, as their symmetry is indeed impressive considering the very early stages of social development they were created in.

More precisely located on the pampa, which is a large flat region in the south of Peru, the Nazca Desert is bounded by the towns of Nazca and Palpa and is described as having one of the harshest, most infertile climates on the globe, determined by the ever-present aridity. That feature itself was an auspicious condition for creating these admirable designs, as it ensured a very limited, quasi-inexistent impact of the natural elements on them. That is why they have been preserved in an optimal condition for such an extended period of time.

Each geoglyph consists of a number of conjoining straight or curved lines forming a certain figure, either simple, (such as a geometrical shape) or more intricate, such as the few dozens of animal representations, among them various types of birds, mammals, reptiles, sea life and insects, reflecting the diversity of the local biotopes at that particular point in time. Plant drawings and by far more complex human ones are present as well. Due to their importance, the Nazca Lines have been declared a UNESCO Heritage Site and are of great interest to any group or individual studying the ways of life as well as spirituality of ancient civilisations. They are also of significant importance for the touristic sector, as they are considered some of the most valuable geoglyphs in existence.